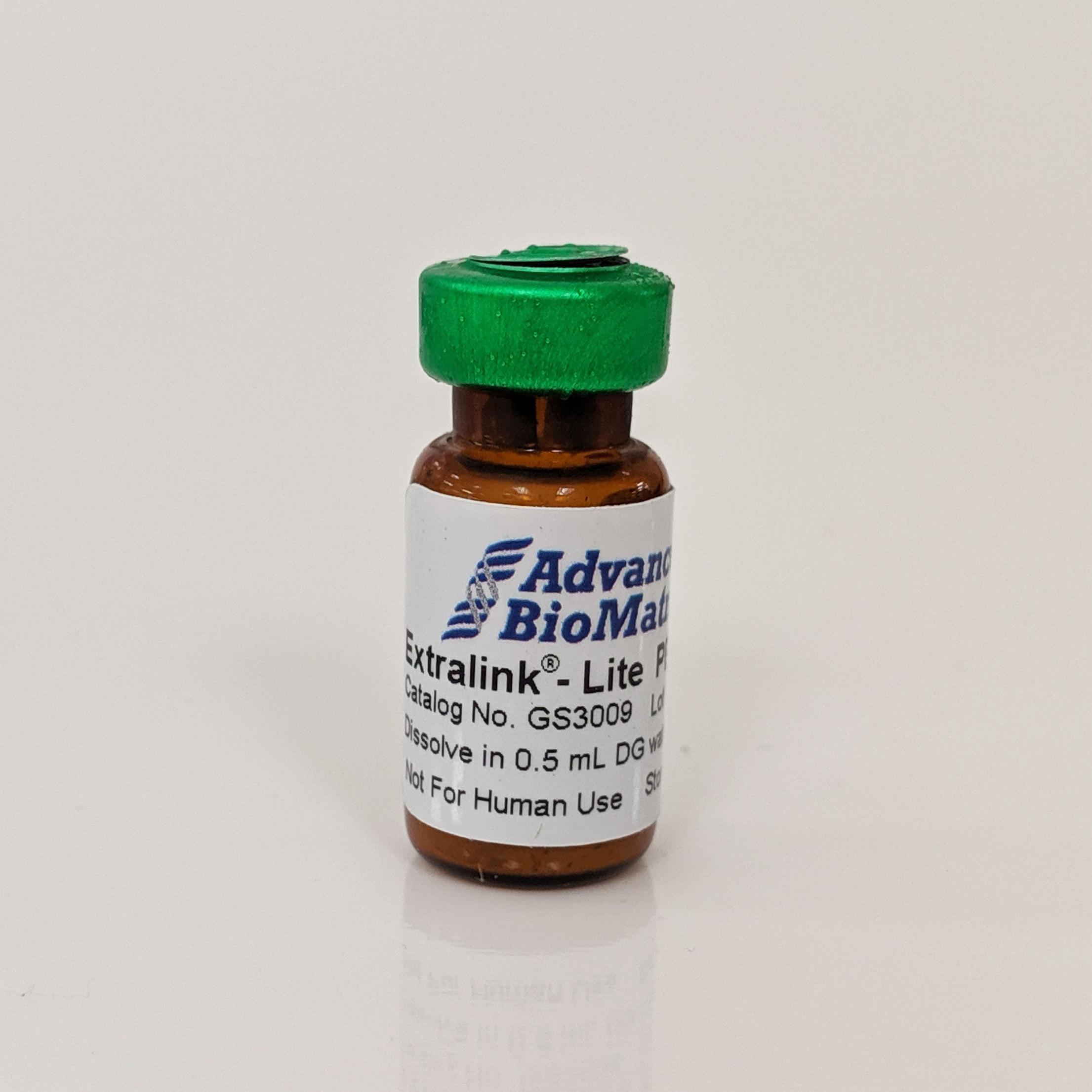 Extralink® is polyethylene diacrylate (PEGDA) with a molecular weight of 3500 Da. It is a thiol-reactive crosslinker that convalently reacts with the thiol groups in Glycosil®, Heprasil® and Gelin-S® to form viscoelastic hydrogels. Extralink® Lite vials are >80% acrylated and supplied as the crosslinking component in the HyStem® hydrogel kits.

Gelation
Extralink® Lite is used to chemically crosslink Glycosil. The gelation time ranges from as short as 5 minutes to as long as a couple of hours, depending upon the amount of Extralink used and the concentration/dilution of the Glycosil.

Extralink® Lite is used in place of Extralink for applications where Gelin-S is not included. The higher relative concentration of Glycosil requires less crosslinker to emulate the gelation time and stiffness of HyStem-C and HyStem-HP.

Extralink: Store Extralink in the original vial unopened at -20°C for up to one year. Reconstituted Extralink solutions can be stored at -20 °C for ~ one month.

Note: It is recommended to reconstitute each vial in its entirety.

When reconstituted, it will be in 1x phosphate buffered saline (PBS) buffer pH ~7.4. The amount of DG Water used for dissolution depends on the vial.

Extralink® should be prepared in the following manner:

Note: Hydrogels made using only Extralink® and Glycosil® or Heprasil® will not support cell attachment. For cell attachment, the Gelin-S component or other binding sites is required.

Globular particles less than 75 kDa should be able to freely diffuse through a HyStem hydrogel.

When reconstituted using DG water, the pH of each HyStem component will be approximately 7.4-7.6.

One year from the date of receipt, if stored properly.

Any sterile, deionized, degassed water can be substituted for reconstitution. However, in order to ensure accurate and predictable dissolution and gelation times, our DG Water is highly recommended, as it is degassed, blanketed in argon, and has undergone validation testing with each HyStem component.

Gelin-S provides cellular attachment sites when incorporated in the hydrogel. Gelin-S is thiol-modified, denatured collagen I, derived from either bovine or porcine sources. Gelin-S is included in all HyStem-C and HyStem-HP kits.

Yes. ECM proteins, such as laminin, collagen, fibronectin, or vitronectin can be non-covalently incorporated into the hydrogel prior to crosslinking.

HyStem hydrogels and sponges differ in hydration and homogeneity. HyStem sponges are typically polymerized hydrogels that are subsequently freeze-dried. The resulting sponge is a fibrous, mesh network with pores and niches that enable cells to infiltrate and adhere. A true HyStem hydrogel is an encapsulating liquid that polymerizes around suspended cells in culture.

Gelation time is affected by multiple aspects of the gel’s composition.

Gelation time can be dramatically changed by varying the Glycosil (or Heprasil) and Gelin-S concentrations. Concentrated solutions of Glycosil (or Heprasil) and Gelin-S will create a solution with a much shorter gelation time. This can easily be done by reconstituting the components in a smaller volume of DG Water. Alternatively, diluting these components in larger volumes of DG Water will dramatically increase the total time to form the hydrogel.

HyStem Hydrogels are virtually transparent and should not interfere with microscopy.

HyStem hydrogels may generate mild inflammation as part of the body’s natural healing process in response to injury. HyStem hydrogels do not trigger immune response when used in vivo. (These products are not for human use)

HyStem is degraded in vivo by matrix metalloproteinases (collagenases) and hyaluronidases.

Trypsin, Dipase, collagenase, and hyaluronidase have been used to help detach cells from the surface or from within HyStem hydrogels.

In general, the pore size for HyStem-C and HyStem-HP hydrogels is ~17 nm.

We routinely perform Ellmans test on our Thiolated Hyaluronic Acid. Our product falls between 0.55-0.75 umoles/mg, resulting in a degree of thiolation between 20-30%.

The approximate molecular weight of the thiolated hyaluronic acid is 300 kDa.

The hyaluronic acid has been thiol-modified on the carboxy groups. These active groups react with acrylate groups on PEGDA, resulting in a hydrogel.

We strongly recommend using the HyStem components the same day that they are solubilized, in order to minimize the chance of autocrosslinking. We cannot guarantee the quality of the product past the first day. If experiments need to be done across two or more days, we recommend leaving the solubilized components at room temperature overnight (capped, in the original vials). We do not recommend re-freezing the components once solubilized.

Click on the title of the desired protocol to learn more:

Enzyme Digestion of HyStem Hydrogels for Recovery of Encapsulated Cells

This product is for R&D use only and is not intended for human or other uses. Please consult the Material Safety Data Sheet for information regarding hazards and safe handling practices. 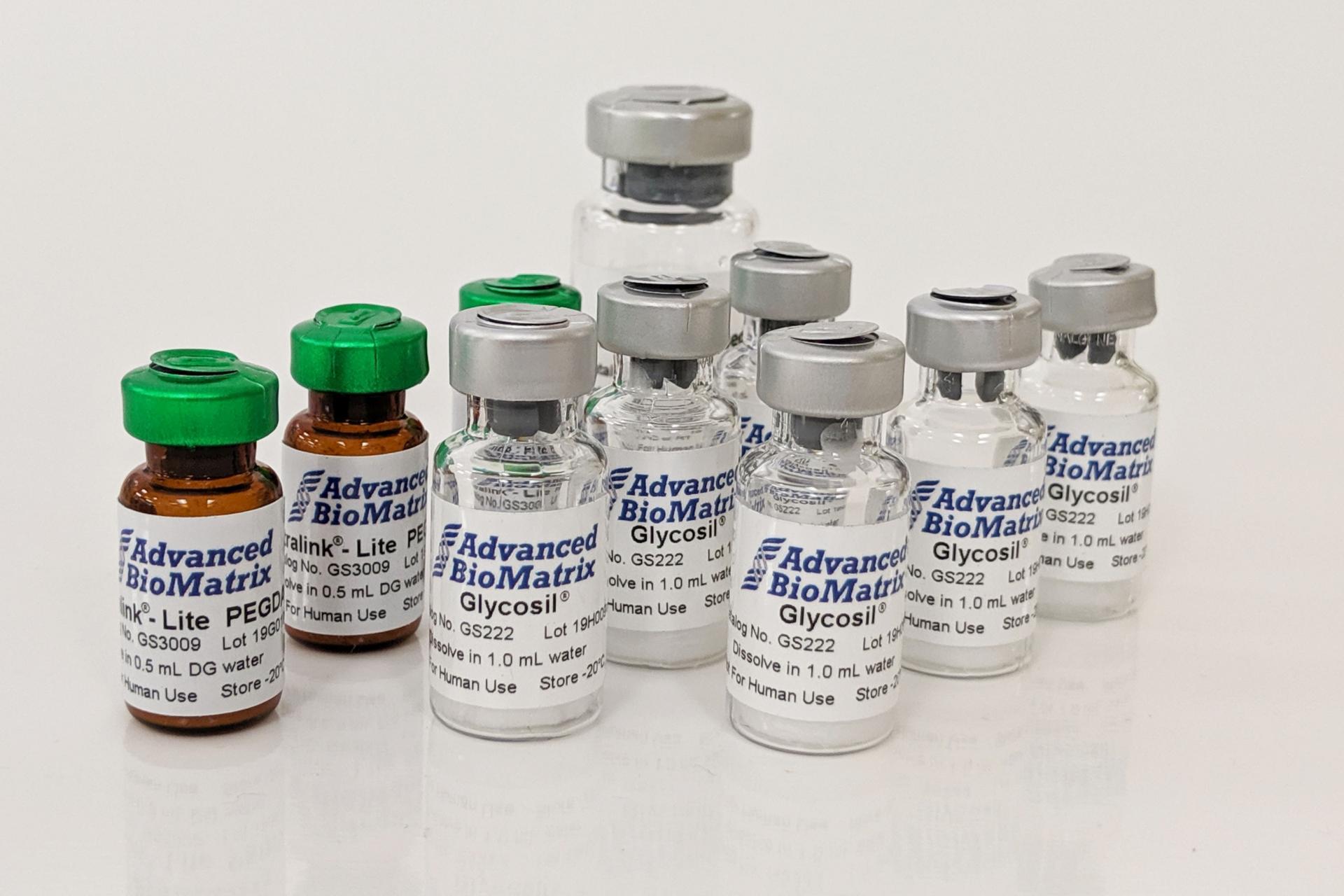 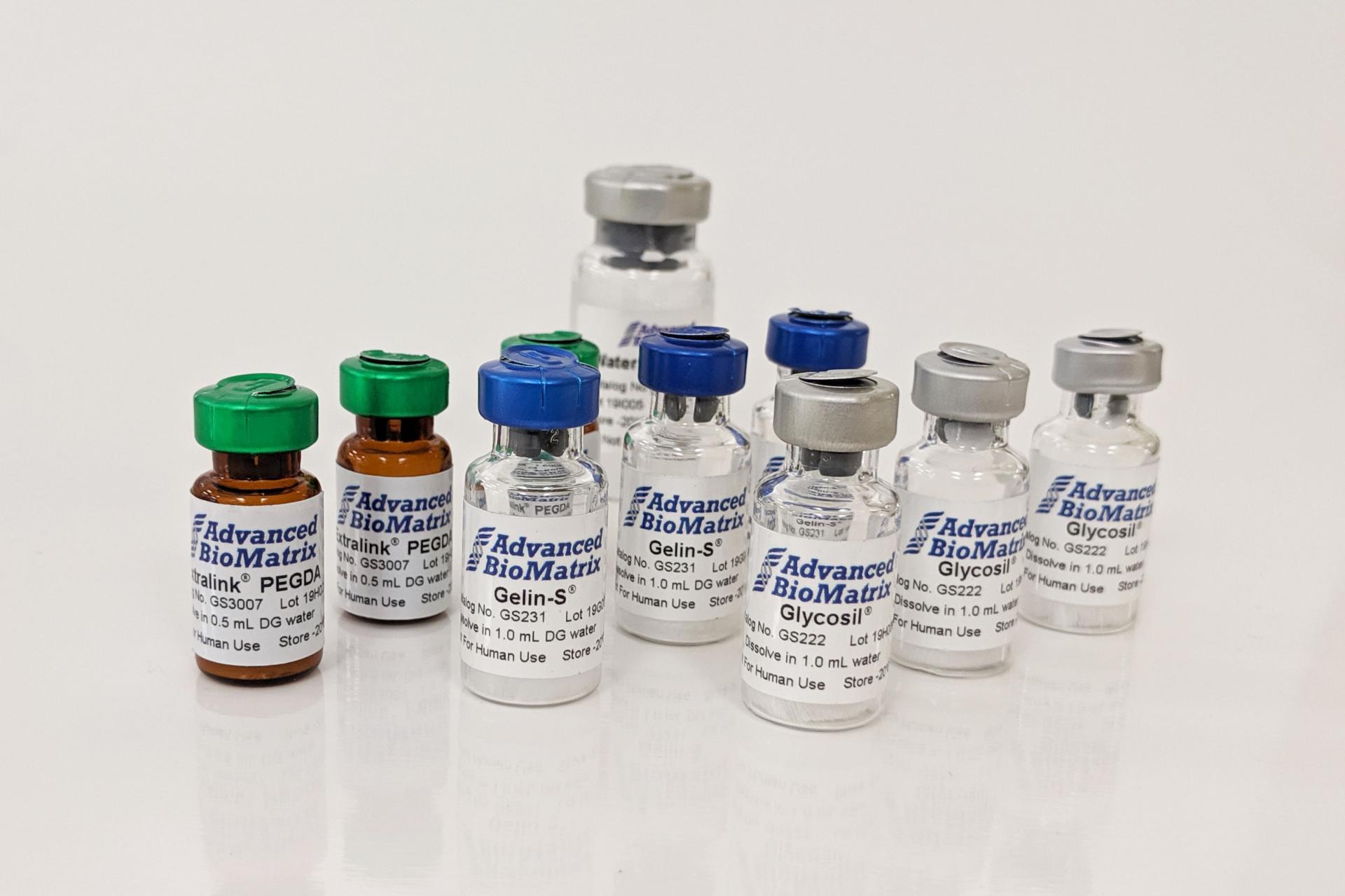 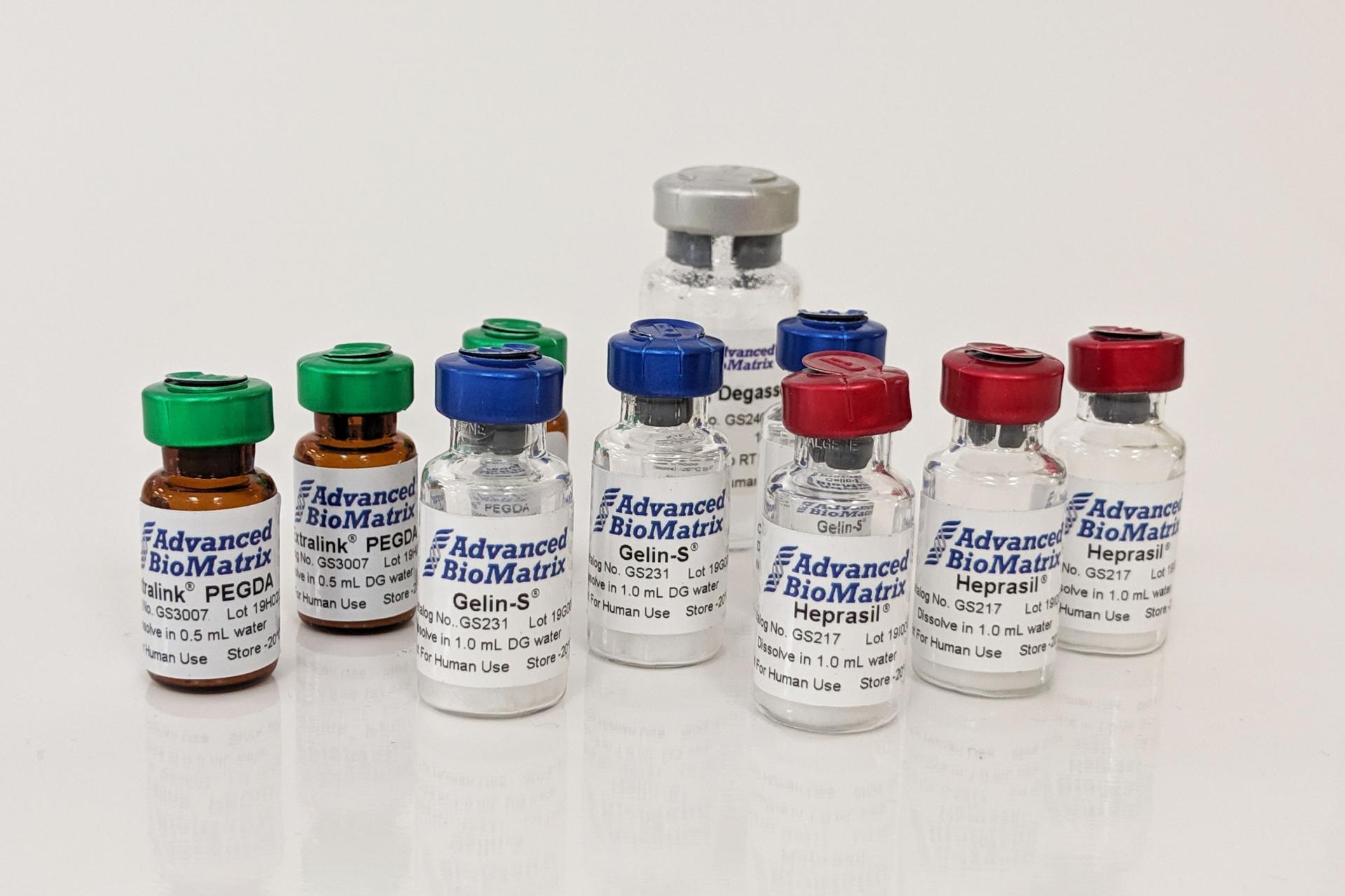